Posted by turning point treatment at 7:48 PM No comments:

On the morning of July 21, 2009 while I was driving to work, a strange news clip on the radio caught my attention. At first, I did not believe what I had heard. Talking to myself, I discounted the news saying nobody in the world would be that stupid. On my way to the hospital, I picked up the New York Times and to my astonishment, the same headline appeared on the front page: "U.S. Withheld Data Showing Driving Risks." Like my fellow Americans, I am on the road to make a living. Any kind of safe driving tips would kindle my interest. Naturally I was curious to learn more about the nature of the risks that the U.S. government was referring to and the reasons why they withheld such important data from the public. Once I scanned the article, I could not contain my laughter at the stupidity of the issue and the politics around it.

Apparently in 2003, the National Highway Traffic Safety Administration decided not to make public hundreds of pages of research and warnings about the safety risks posed by drivers who talk on their cell phone (both hands-free and hand-held) while driving. This is disturbing on two counts. First, what a waste of our hard earned tax dollars when such valuable research was not utilized to enact laws early enough to save human lives. Secondly, why are tax payer dollars being spent on a matter of common sense? Even a person with a moderate IQ knows that driving while deeply immersed in a conversation is hazardous. A driver distracted from any source - loud music, texting, emailing, eating, drinking or applying make-up poses the greatest threat not only to himself, but also to those in close proximity. If you are a conscientious driver like me, I am sure you will definitely watch out for such drivers on the road.

The stupidity reached its peak when the NHTSA agency in its infinite wisdom decided to withhold the obvious findings of their research for fear of offending or antagonizing law makers in congress, because Congress warned the agency to stay within its mission of gathering safety data but not to lobby states. It is outrageous that political concerns outweigh the safety concerns of the individual. Mr. Clarence Ditlow of the center for auto safety is furious about this cover-up. He rightfully alludes to driving while multi-tasking is as bad as driving while intoxicated. If the research results were made public as early as in 2003, it probably could have saved many lives by enacting appropriate laws to discourage such irresponsible driving habits. We all know that the seat belt law has saved untold number of precious lives. For your information drivers on the cell phone have caused 955 fatalities and 240,000 accidents in 2002 alone. Some lawmakers shocked by such statistics, want to educate people about the dangers of distracted driving. Education alone is not enough to make people to change their driving habits for the better. What people need is incentives in the form of substantial discounts on their auto insurance premiums for a good driving record and heavy penalties, like long prison terms for irresponsible drivers.

Unfortunately, I have yet to see the nation as a whole putting the politics and petty prejudices aside. We must galvanize together to protect innocent, law-abiding drivers as well as pedestrians. Therefore, while lawmakers are pondering over the right course of action, researchers are engrossed in collecting data, and irresponsible drivers are still contemplating whether to change their driving habits, the best course of action for all sensible drivers who care for their own and others lives, is to hone-in on their defensive driving skills to reach their destination safely at all times in all conditions, use cell phones only in the case of an emergency or pull over to a safe spot to take the phone call. In the end, common sense must prevail!

Posted by turning point treatment at 10:41 AM No comments:

If only I, the UNBORN CHILD, could speak: A third perspective on Abortion

Have you ever wondered how I, the unborn child, feel about my arrival into this world? Probably not, so here's what I have to say. For starters, it was not my decision to be conceived. However once I am in the womb of my mot her, I and only I have a say whether I should be terminated or allowed to continue my journey into this world. Unfortunately, everyone else (i.e., politicians, religious leaders, reformists) except me, is deciding my fate. Some people (pro-life) fight to preserve and protect my life at any cost, while others (pro-choice) vehemently defend the freedom of the woman who bears me. What Irony! My presence ignites a conflict between the two most revered ideals- the right of life versus the right of freedom. Ultimately, this is about me and my destiny.
For one second, all of you stop bickering over me and have the decency to listen to my side. Naturally, I would like to enter this world as a bundle of joy and a precious gift from God to my biological parents. I am entitled to a warm welcome from my biological mother. I do not even mind being born to a young, irresponsible drug addict as long as she welcomes me with open arms. Even in the most adverse situation and in the absence of a father figure, I will take my chances with my biological mother and fight for my survival. I did not ask anyone to create me. I do not want to be an unintended by-product of irresponsible, selfish adults indulging in pleasures without any regard for consequences. I do not like to be born to such individuals who conceived me without an ounce of discretion and have second thoughts about me afterwards. For no fault of mine, I should not have to face hardships or abuse.
Even if I am unwanted, and instead am given away to a wonderful, loving and caring family that chose me – will I be happy? Possibly, but I will always wonder why my biological parents did not want me. Being abandoned is a heavy burden to carry forever. Otherwise, why would good, caring adopted parents agonize over revealing my true identity. No one in this world can offer me a valid moral reason for my biological parents' actions. I will have to bear this emotional scar for the rest of my life.
Just think about my plight and imagine how I feel. I am inside the womb. I cannot speak out loud. I do not want to come into this world as an unwanted child. If I am an inconvenience to my biological parents, don't conceive me. Be mature and responsible, and utilize the medical marvels to prevent my conception. Please hear my silent pleas.
I would hate to start my life as a reject and unwelcome guest of my biological parents. Unfortunately, I neither have the strength to convey my sentiments to sparring adults, nor the power to act on my sentiments. Therefore, I am destined to patiently wait for adults to make their final decision on my behalf. I truly hope my views and sentiments will add more credibility and offer a third dimension to the topic of abortion.
I, Dr. Balasa L. Prasad, am compelled to speak on behalf of the fetus after helping many individuals in my Behavior Modification clinic to cope with the painful psychological trauma (abandonment complex) caused by their biological parents. I am writing this blog in the hope that their pain and suffering will not go in vain.
Posted by turning point treatment at 7:26 AM No comments: 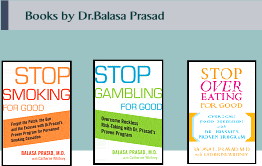